Beans On Toast Back On Tour 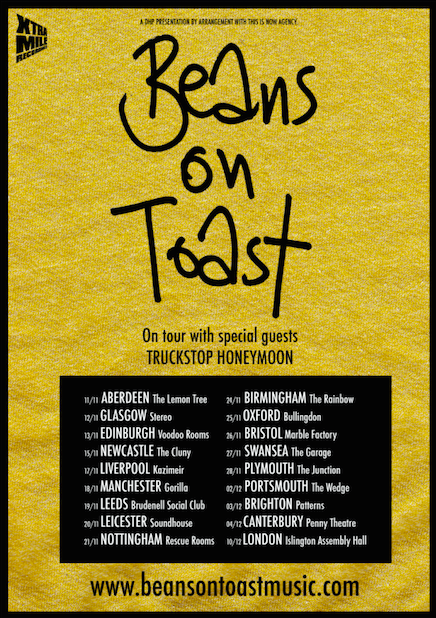 With his career being anything but an uphill struggle this last year, everyone’s favourite irreverent drunk-folk singer, Beans On Toast, returns from his most successful year to date with a plans for a full UK headline tour and new album at the end of the year.

An international man of music these days, ticking off live shows across large swathes of Great Britain, Europe and America as well as a special performance at South Africa’s ArikaBurn in the last 12 months, it is no surprise that Beans has turned his world wide credentials into tunes, telling his rambling stories about the people and places visited with the help of his trademark wit and side splitting humour.

This August will see Beans On Toast heading out to Lawrence, Kansas to record his seventh studio album, which will then come out on Xtra Mile Recodings on 1st December. Proving he is an artist that is ever evolving, this time he is teaming up both onstage and in the studio with the equally cutthroat counterculture act, Truckstop Honeymoon. A friendship formed at the UK’s Larmer Tree festival, and in the true spirit of camaraderie, the duo will be joining Beans and long-term trusted sidekick Bobby Banjo on stage as both his backing band and support for eighteen dates this side of the pond. Ending with a home coming show at London’s Islington Assembly Halls on 10th December, this tour marks the next adventure for Beans On Toast.

Beans On Toast and Truckstop Honeymoon will be playing:

Beans On Toast’s next album will be out 1st December 2014 via Xtra Mile Recordings. Tickets for the UK tour will go on sale 3rd July at 10am via www.beansontoastmusic.com.