BEANS ON TOAST STARTER FOR GLASTONBURY 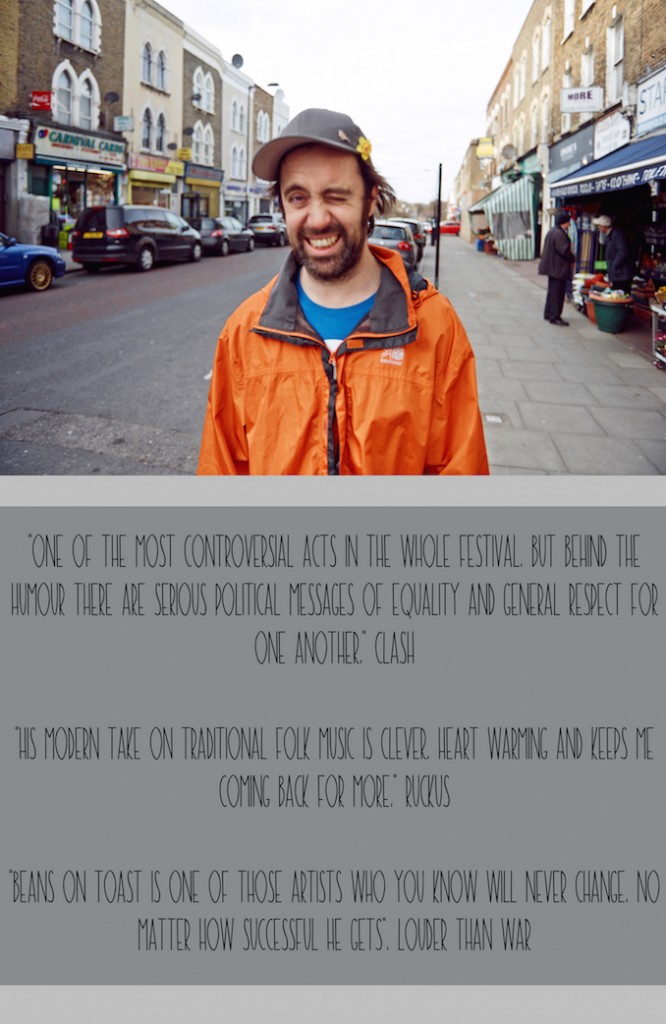 Known far and wide as the drunk folk singer who once penned the infamous ode ‘I Can’t Get a Gig at Glastonbury’, Beans On Toast has come full circle by not only being booked for multiple performances at this year’s legendary festival but also landing himself the prestigious opening number on Thursday 20 June at 8pm on Shangri-La’s Hell Stage serving up a starter of simple songs, with no holds barred honesty and quick wit.   With the Glastonbury featuring in classic tracks ‘MDMAmazing’ and ‘The Other Side of the Fence’ and having actually played every Glastonbury since 2007, Beans On Toast remains a Worthy Farm staple and this year is no different as in addition as being the first performer on, he’ll also be playing sets on Saturday at 1pm on Greenpeace Stage and Sunday 1pm in the Rocket Lounge where he hosts ‘An Afternoon with..’ which will feature some special guests.   Since last year’s festival, which saw Beans and trusty sidekick Bobby Banjo join a super group with peers Mumford and Sons and beat the power cut by insisting the show must go on, this hero of counter-culture has smashed his biggest year to date as he performed at over 18 festivals throughout last summer as well as conquering his largest show Camden’s Electric Ballroom as part of his UK most successful headline tour. But that’s not where it stopped for Beans, as in addition to these milestones, his sixth studio album ‘The Grand Scheme of Things’ was hailed as his best and most mature yet, taking in meatier subjects such as chicken farming, terrorism and the home cooking of new wife Lizzy Bee.   This year has seen him take to new territories, playing different venues and tackling new topics, as he took his three-chord master plan to the masses, exporting stateside for his most extensive US tour yet, supporting Truckstop Honeymoon and joining the Flogging Molly’s Salty Dog Cruise from Miami to the Bahamas! Tough life you say? Well Beans also be played his first ever show in Africa and indeed the Southern Hemisphere as he visited Afrikaburn festival in South Africa in April. With his latest Spring Tour just finished, he’s sure to still be on a high for Glastonbury, although just an emotional one these days!