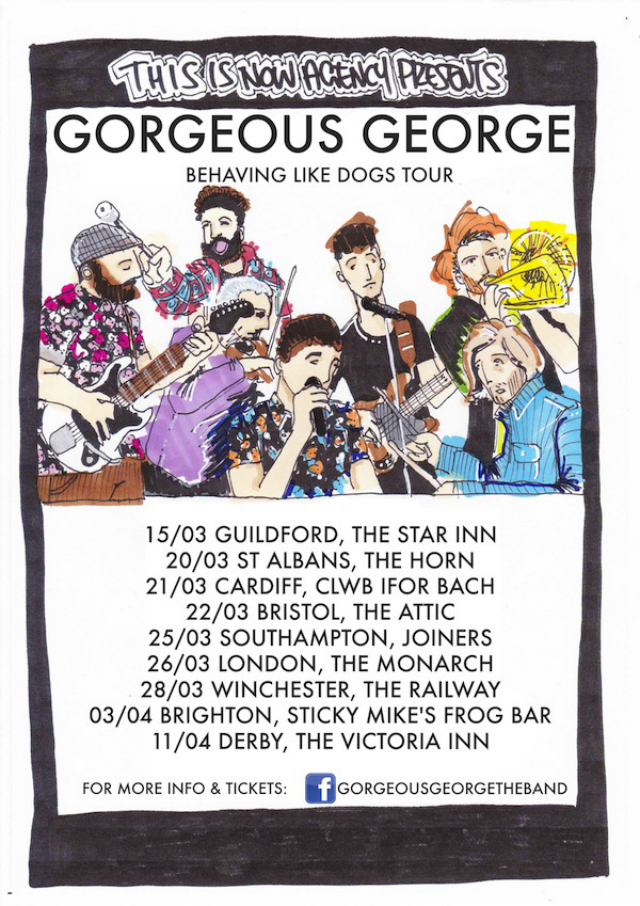 Gorgeous George are a band with a sound as new as this Saturday night lashed to a thousand years of European folk melody and with a blinder of a year behind them, this 7 strong gang of loveable South London rogues have announced their debut ‘Behaving Like Dogs’ headline tour for the spring 2014.

Starting on Saturday 15 March at Guildford’s Star Inn, it’s going to be a full-on lyrical assault as the band perform 9 dates at a lung-busting gallop, with melodies and rhythms flying from innumerable instruments like the screams and pistol fire of a drunken Balkan wedding party in deepest darkest Peckham.

Following the success of debut 5 track ‘Saturday Night’ EP back in November and going down a storm supporting folk raconteur Beans On Toast during his ‘Live Album Tour’ across the UK, the band are currently in the studio recording their much anticipated second EP with Chrissy Boy from Madness on board as their producer and mentor.

The festival favourites are looking at a busy summer of appearances following raucous foot stomping performances at last year’s Bestival, Secret Garden Party, Nozstock and Wilderness amongst others.

Gorgeous George are a band who love to perform live in front of a crowd and this is really when they are at there best.