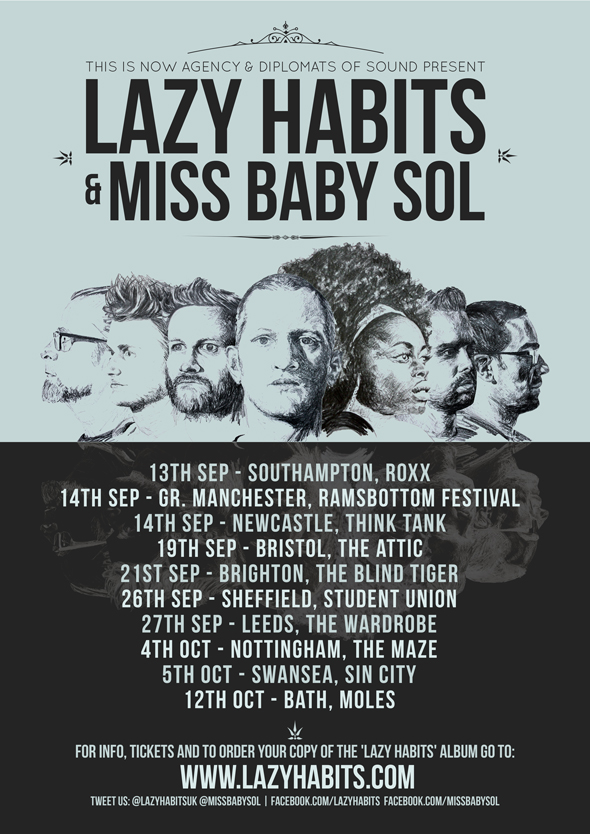  This Autumn sees one of the UK’s finest bands take to the road for their annual tour with a new and improved line up featuring long-time collaborator – Baby Sol. Lazy Habits and Miss Baby Sol will unite on stages throughout the UK to showcase their infectious, soul-tinged, Hip Hop, Brass and Bass sound.
From the moment Baby Sol performed at one of Lazy Habits’ first ever live shows their musical paths have intertwined. “Memory Banks” was the beginning and they haven’t looked back since, consistently collaborating both on stages at venues (Jazz Café, Roundhouse, Shepherd’s Bush Empire) and festivals (Green Man, Bestival, Glastonbury) as well as in the studio.

But that was then, and “This Is Now” presents the first ever Lazy Habits and Miss Baby Sol tour, with both shows combined into one magical set. The one and a half hour long show features both classic material and new songs from both artists; a never been seen before full AV show with brass, bass and more drums than you can shake a (drum) stick at! This is a meeting of two exceptional talents and the result is something truly unique.

LAZY HABITS: Following the release of their critically acclaimed, self-titled, debut album in November 2012, Lazy Habits established themselves as one of the best live bands on the UK circuit – performing at over 70 shows across the UK and Europe in the same year. 2013 has already seen Lazy Habits tour the French Alps, East Asia and support Young Blood Brass Band on their UK tour. Lazy Habits have most recently been working on music for a forthcoming cinema release film and have main stage festival performances over the summer at Beach Break LIVE, Standon Calling and Wilderness. Championed by the likes of Ghostpoet, Joss Stone and a host of BBC radio DJ’s; the future looks anything but Lazy for the 7-piece London band.

BABY SOL: Baby Sol’s Jazz, Soul and Reggae infused debut EP “Before I Begin (The Journey)” was released in 2011. The only full band show for it’s release at the Hoxton Bar and Kitchen featured the Lazy Habits band and was a sold out event. Since its release, Baby has been working in the music industry on almost every level; touring the world as a professional vocalist, collaborating/writing with some of the country’s best producers, including UK Producer/Artist Redlight on the UK No.5 hit “Lost in Your Love” and Co-curating 2013’s UpRise Festival, in partnership with Amnesty International, for whom she released her last single “She Cries”.

All full info and tickets, head to www.lazyhabits.co.uk