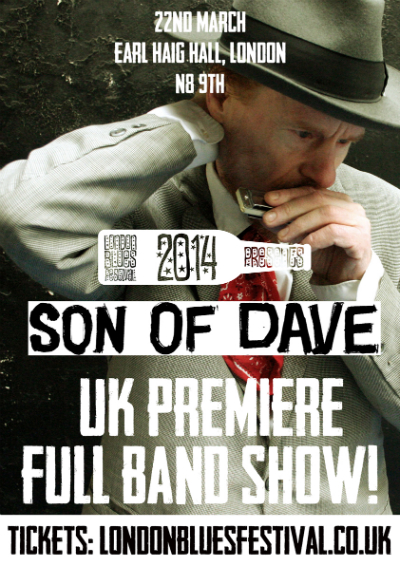 Heading out for more live shows in 2014, The London Blues Festival will be the lucky hosts to the first UK performance by Son of Dave with a full band live at Crouch End’s Earl Haig Hall on Saturday 22nd March.

His usual one-man-arsenal show has gained him international notoriety with close to a thousand performances all over the western world but now he’s joined by This is Now’s The Royal Organ Duo on organ and drums, and Marta Riccardi on bass and backing vocals, filling out the sound and bringing the songs from the new album to life.

Son of Dave was born in the winter of the summer of love and used to be in the Crash Test Dummies. So much has happened since then. “I’ve had hard knocks, sure,” he says. “That’s where the desire for revenge comes from. But people don’t want to hear what kind. To hell with the phony hobo blues. Fuck the divorcée mid-life crisis blues. Here’s my new record. It’s more joyful than my previous ones, has great musician buddies on it and covers a lot of ground. I wrote it on piano, guitar, bass and drums, like the old days of R’n’B, though I still play too much harmonica.”

It’s blues, disco, funk, soul and all sorts of delicious stuff all unmistakably done the Son of Dave way. Don’t miss this.

Tickets are on sale now from £5 and can be purchased here.

More information can be found on the event’s Facebook available here.